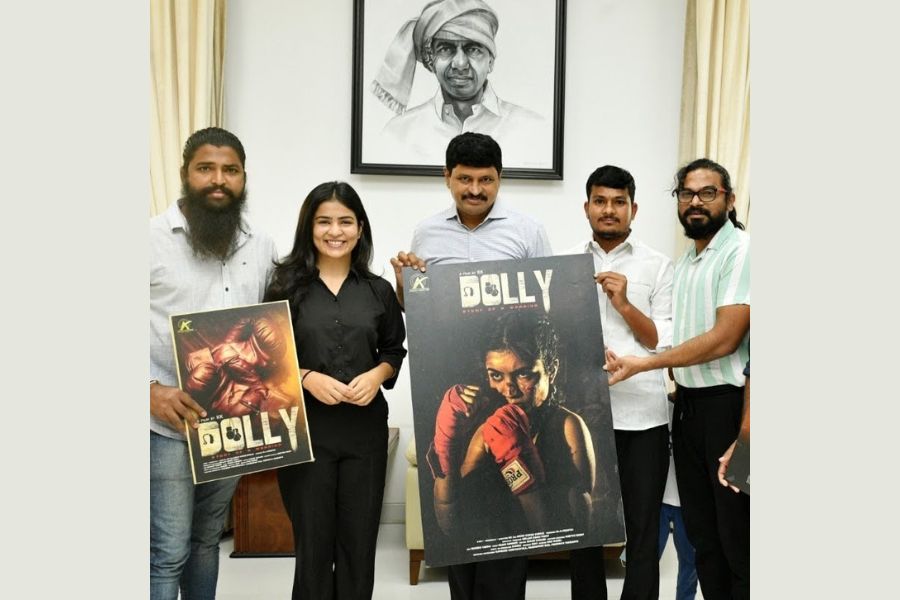 London [United Kingdom], November 29: For any filmmaker, nothing matters more than seeing their film reach out to audiences from different parts of the world. Dr Kiran Kumar Durga is no exception. His directorial Telugu film Dolly, a female-led film on street boxing, got acclaim at several film festivals. And now, it has got a digital release on Amazon Prime UK.

Dolly stars popular Marathi actress Pranjali Kanzarkar in the role of a deaf and dumb girl who defies all odds to become a boxer, despite no support from her father. Besides Pranjali, Dolly also features Temper Vamshi and Dreedhar Reddy. K Krathi is the producer of Dolly and is backed by Aarav Karthee Creations.

Dr Kiran Kumar Durga, whose screen name is KK, said, “I have been passionate about filmmaking since I was in school. In 2013, I made my first short film with a Panasonic camera named Its My Life. I released it on YouTube, and it was well received. In 2018, I wrote Dolly’s script as I was inclined towards street boxing at that time. To prepare, I watched a lot of movies based on boxing. I even trained for 2 years to understand the sport in detail. I made a strong team comprising director of photography Rakesh Sharma and executive producer Bollam Siddu Yadav. We jointly did the screen test and photography test on a lot of actors. And finally, we decided to sign Pranjali Kanzarkar as she was perfect to play the protagonist.”

He further said, “Dolly went on floors in March 2021. The first schedule lasted six days. For the second schedule, we required an actor to play the antagonist. We realized that Temper Vamshi would be apt. His physique and personality fit the character well. He was training for MMA for his role in Liger. That made it convenient for us as it meant that we wouldn’t have to train him for boxing choreography. The second schedule commenced in September 2021. It was a successful shoot. The post-production got over in March 2022.”

Dr Kiran Kumar Durga added, “Finally, my dream came true as I got a chance to see my film on the silver screen. I submitted the film to the Lift-Off sessions, Film Festival. We got selected for its finals, whose ceremony was held in London. At Madras Independent Film Festival 2022, we won the Best Feature Film award. Pranjali Kanzarkar also won the award for Best Actress at this film festival and also at Utsav Film Festival. We got officially selected for other film festivals too, like Pune Film Festival, etc. We expect more film festivals to pick up Dolly as and when we submit. Meanwhile, Dolly has been released on Amazon Prime UK, and it’ll soon premiere in India in December 2022.”

Pranjali Kanzarkar is on cloud nine as she exulted, “I have given my blood, sweat and tears to play Dolly. It was a very challenging part, and I am so happy to see the response at the various film festivals. The biggest high was winning the Best Actress award. I can’t wait for the film to be seen by a larger audience on Amazon Prime Video.”

She also revealed, “December 2022 will be a special month. On the one hand, movie buffs in India will get a chance to see Dolly on Amazon Prime Video, while on the other hand, my Marathi film, Ekdum Kadak, will hit cinemas on December 2.”

Lastly, editor Sagar Vanjari remarks, “Editing Dolly was a challenge. We had to ensure it stood out from the rest of the boxing films. But Dr Kiran Kumar Durga had shot it very well, and hence, working on Durga was an enjoyable experience.”

If you have any objection to this press release content, kindly contact pr.error.rectification[at]gmail.com to notify us. We will respond and rectify the situation in the next 24 hours.